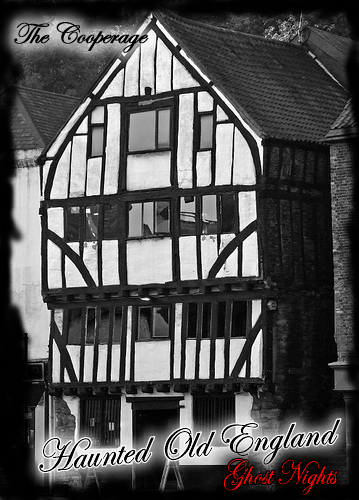 Background:  The Cooperage is a large historical timber framed Newcastle pub dating to the 14th century. Previously it had been used as a Coopers workshop (hence the name) and supplied many of the barrels used in the cities other pubs in the 18th century.

This building has been variously a merchant's dwelling, a mayoral residence, a prison for pressgangs a warehouse, a court and of course a barrel factory (cooperage).

There is a cosy atmosphere in the pub with two small bars on either side of the main entrance, but don’t let this fool you, as something darker and more sinister lurks in the darkest parts of the building. We have investigators who refuse to go into this building due to the nature of the violent attacks on team members.

A child killers murder: We know of one murder that tuck place here in the 1800s, when a man who was a supposed child killer from old Goats head or Gateshead fled into the building while been chased by four men baying for his blood. The man ran up to the middle level to where he tried to hide in the cooper’s workshop. He was found and pounced on by the men, they beat him and kicked him half to death and then pushed him up against the front wall where the windows now overlook the river, they tuck a dagger and cut deep into his neck and held his head up till he was dead, the men then tried to drag the body back down the steps but found this too much, they then propped him up next to where the toilets are now on the middle floor, the room had been bled red with the blood from the man’s sliced jugular. The men decided to hide his body in a barrel and hoist it down from the front of the building to where the men dragged the barrel to the river side and dropped the barrel with body off the side in to the ice cold and dark river of the Tyne.

The building is said to be haunted by many ghosts but he is the one to watch out for, He shows himself as a black mass with what looks like a hood, but it is not it’s a old waxed fishing hat that hangs over the side of his face. He will make you taste the blood he tasted as he died and this is said to be quite an horrific experience for spirit mediums who puck up on this man.

The Cooperage is the only survivor of this timber framed houses and is one of the oldest houses in Newcastle, dating from the 14th century. It stands almost below the piers of the High Level Bridge. The building backs onto a steep slope and when the various owners wanted to extend they had to go ‘up’ instead of ‘out’. A story was added around every century using bricks brought in as ships’ ballast.

The building is rumoured that its wooden frame was recycled from a ship that sank in the Tyne.

It is thought there may have been a Cooper here earlier but John Arthur started up in 1853 and it continued in the same family. They are still in business but not making wooden barrels. Business would have been brisk during the 18th and 19th centuries as barrels were the essential cargo container. Hailed as an ingenious invention they are far more complex than they appear.

Haunting Type: Apparition’s, Ghostly voices, unseen but heard footsteps, smashing glasses, violent attacks, ecto-mist, orbs and funnel vortex. This location was a amazing for the Ouija board and for forms of divination as we had spirits coming from a time when the land was just land and there were no housing. There is an evil spirit by the name of Vincent as he called himself and confessed to been a kid killer and that he had murdered 2 kids in Goteshead, now known as Gateshead and was hung for this his body was displayed where the pub now stands. There are reports of a man in a tall hat standing next to the 2nd floor window smoking a pipe. We also had 2 little girls come throw that just wanted to talk about Christmas and that there dad was killed on the side steps and used one of the girls as a shield against an attack of a cooper that worked there in the location. Energy: cold spots, Hot spots moving around locations

THE FORMER PUB OWNER tried to kill his ex-partner and her new boyfriend in a horrific premeditated knife attack: This tuck place in 2008, the man in question was the landlord of the building. Some say the attack tuck place because he felt betrayed, other believe he may of been possessed or something had twisted him in to the wrong way of thinking, could it of been one of the many people who have died on the site.

Findings: The location was an amazing place to ghost hunt although the place was quiet noisy and the floors had to have a member of staff in each location. The night was good with plenty of activity and sittings. The best thing that we had witnessed was throw a night vision camera that did not record this point and still can’t figure out why. We witnessed team 2 undertaking an Ouija board experiment on the 2nd floor where we noticed an extra person sitting at the table. on contact via the walkie-talkies they confirmed there was no one sitting next to them although the air temp, had dropped from 16c down to just 9c and the spirit that they had contacted was a small girl and this was what we could see a small girl sitting and moving. She would move and vanish then partly show her hair the face and then side then she was gone again. One our investigation we had a black mass burst through the door and engulfed one of our team leaders, the mass looked like men running.

Foot Note: Great location with free night time parking just over the road. The down stairs bar will not close until 1am then its open for investigation. The maximum amount on an overnight for this place would be 15 or 20 people at a push if it was for profit. Not too badly priced for an overnight and not accessible on weekends as this is a very busy Newcastle bar and night club. It's well worth checking out the Newcastle Ghost walk if you’re in this location as they have some tails and reports from this location plus there is a great small investigation involved in the ghost walk.

The Above image was caught by Steve Brownlee investigator in training we have looked into this photo and the report stated that a spiral of mist came down and formed a man hanging. Steve snapped the shot as it was dispersing.

The Above image was caught by Louise Mary Smith there was 2 hand prints that seam to show up on film but not in real life there on the wood posts to the left of the image.

Click here to buy the book now from Warterstones