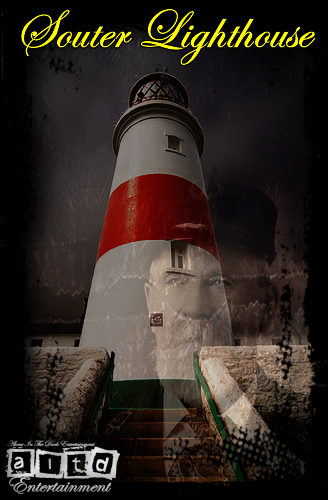 Origin of the haunting: Built in 1871, to provide a light which would guide ships away from danger, war,  general life, suicide, one of the most haunted lighthouse's in the UK near Sunderland in the north of England.

Background: The lighthouse is located on Lizard Point at Marsden, but takes its name from Souter Point, which is located a mile to the south. This was the intended site for the lighthouse, but it was felt that Lizard Point offered better visibility, as the cliffs there are higher, so the lighthouse was built there instead. The Souter Lighthouse name was retained in order to avoid confusion with the then recently built Lizard Lighthouse in Cornwall.

Designed by James Douglass and opened in 1871, the lighthouse was built due to the dangerous reefs directly under the water in the surrounding area. In one year alone - 1860 - there were 20 shipwrecks. This contributed to making this coastline the most dangerous in the country with an average of around 44 shipwrecks per every mile of coastline. Souter Lighthouse's original generator Souter Lighthouse was the first to use alternating electric current, the most advanced lighthouse technology of its day.

Douglass also designed the fourth incarnation of the Eddystone Lighthouse off the coast of Plymouth. The 800,000 candle power light was generated using carbon arcs and not a standard filament bulb and could be seen for up to 26 miles. The electricity was generated using a steam engine located in the engine house.

Lighthouse ghosts
In 1838, Grace Darling earned her reputation as the country's most celebrated maritime heroine when she rescued crew members of a sinking ship in treacherous conditions. More than 160 years later, her niece, Isobella Darling, is still making her presence felt.

Staff have reported spoons levitating, cold spots and the feeling of being physically grabbed, with much of the activity reportedly taking place in the kitchen and living areas. They have also commented on the strong odour of tobacco in the kitchen corridor, and also in the area around the recreated Keeper’s Cottage.

A waitress was also surprised to spot at the far end of the kitchen corridor a man in an old-fashioned lighthouse keeper’s uniform, who then promptly disappeared.

Ghost story: This Location has so many ghost stories. One of the main ghost stories are of a young girl who is said to have been seennear the engine room. People have reported her crying and others have heard there names been called by a young female voice could it be that of Isobella Darling, niece of Grace Darling who is one of the most celebrated maritime heroines of all time.

Staff have reported spoons levitating, cold spots and the feeling of being physically grabbed, with much of the activity reportedly taking place in the kitchen and living areas.

A waitress was also surprised to spot at the far end of the kitchen corridor a man in an old-fashioned lighthouse keeper's uniform, who then promptly disappeared. Could it be a former keeper who is responsible for the odor of tobacco experienced many times?

Findings: This place is always an amazing investigation with new stuff discovered all the time. Some members of our team have investigated Souter Lighthouse many times and things still happen that never happened before. Some of the best things witnessed in this location are a member of staff been physically been touched across the back of the legs. We have recorded many EVP recordings here of a young female. A ghost has also been seen on our CCTV cams along with odd voices and strange black shapes. Most Haunted the TV show also spent the night in Souter Lighthouse 2 members had stones thrown at them.